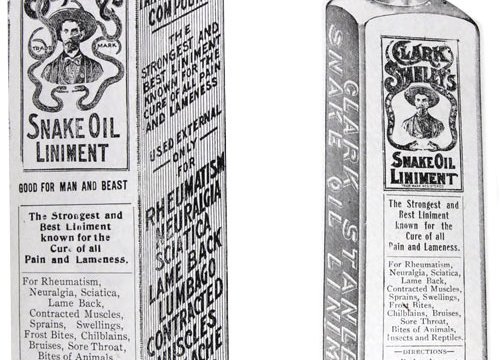 In the mid 1800s Southeastern Chinese migrant workers came over in droves to work on the Transcontinental Railroad. They brought a variety of Eastern medicines over, including snake oil.

After a long day of back-breaking railroad labor, snake oil provided some much needed relief in a pre-Aspirin world.

That snake oil could heal pain was such a wild, sticky, portable idea, so much so that Americans far and wide quickly learned about snake oil’s efficacy in reducing inflammation. I imagine it was as close to viral as an idea could go at the time.

As a result many saw an opportunity to profit from snake oil’s growing reputation and mystery.

As an aside, both have the acids for treatment. But the active ingredient that reduces inflammation when topically applied is almost 3x more potent in Chinese water snake oil than rattlesnake oil, meaning the latter falls below a therapeutic threshold.

According to his 1989 analysis published in the Western Journal of Medicine, Chinese water snake oil contains 20 percent eicosapentaenoic acid (EPA), one of the two types of omega-3 fatty acids most readily used by our bodies. In comparison, the rattlesnakes had only 8.5 percent EPA.

Between the low supply and unbelievably believable idea that snake oil could heal injuries, illnesses, and pain, a racket was born.

Leveraging Americans’ fascination with cowboys and Indians, a brilliant marketer by the name of Clark Stanley made himself known as the Rattle Snake King by selling his cornerstone product, Snake Oil Liniment, in one of the great brand stories in American history.

The story goes that Mr. Stanley was born around the time of the Civil War in Texas. As a young cowboy, he learned of a powerful elixir while living with the Hopi Indians. The Hopi medicine man took a liking to him because of his “fancy shooting.”

He showed Stanley a magical potion which not only cured the “hundreds” of venomous snake bites Stanley received (presumably from collecting snake oil), but pretty much any form of pain and its cause.

Stanley bottled up the special formula. It looked something like this:

It was even marketed at the largest gathering of Americans in history, the 1893 World’s Fair.

With his cowboy boots and handlebar mustache, he would violently squeeze out the snake oil, wowing never-ending swaths of crowds.

And so it became a household name carried by drug stores far and wide.

That is, until the Bureau of Chemistry (now FDA) found out it was mostly mineral oil.

And that’s how “Snake Oil” became synonymous with fraud and deceit. And the casualty in all of this? Chinese water snake oil, the stuff that works.

This pattern can be seen all the time:

Why SEO got a bad wrap

Flash forward a century to the early 2000’s. Demand and initial value to cost ratio of SEO as an approach to online marketing allowed a lot of SEOs to shortcut their way to ranking big time queries.

It was new, exciting, and worked wonders. Sound familiar?

Then, in a series of search algorithm changes, this became “significantly harder,” and just like when snake oil demand outpaced supply, people started taking advantage.

A lot of customers got burned once the need for good SEO in the marketplace severely outpaced the experience of marketers focused on SEO skills, tarnishing the industry.

The new problem with SEO

The new problem is more existential.

And it’s not really new. Google has been strategically dismantling the industries’ ability to rank and get the resulting traffic one-by-one for over a decade.

But the more recent push of Google SERP features (those FAQs boxes, knowledge panels, image results, Youtube cards, etc.,) resulting in a growing number of zero-click queries means you can rank first and then it’s crickets on your traffic.

The only way this is different than what happened when Facebook’s algorithm updates (suppressing brands from showing in users’ newsfeeds) is that that change happened almost over night. This is coming up on being a decades long change.

The more profitable (or easy) a topic is for Google to take over, the more likely SEO will no longer be worthwhile to go after.

This is a hard truth to accept.

I’m also very uninspired by those I typically look to for advice and thought leadership on what to do next, which is essentially, “accept it and play ball, or don’t.”

And I don’t really have a great answer either.

The only solace I do take is in knowing that:

That’s all I have for now!